Penguinqwert's State of the Battledome: December 2013

This article was written on January 6, 2014. The Battledome may be subject to change after the date of publication.

Greetings battlers, welcome back to the State of the Battledome! The last State of the Battledome article appeared over four months ago. Fear not! It has not gone away for good! I apologize for the lack of general Battledome writing these past few months; my Neopets time has been primarily devoted to League 97 functions. Also, the Battledome hasn't exactly been bursting with activity recently. Still, the year's end marks a good time to recap and reflect. Let's take a look at the last four months of 2013.

Outside of the Games Master Challenge, the next best weapon releases of the past four months would be Throwing Cupcakes and Wraith Scroll, a pair of 10-iconers that could be marginally useful in League 97 play. Battlers with large budgets probably won't be using these weapons in their L97 sets, but cash-strapped participants have some more cheap options to consider.

Looking past the trio of 10-iconers mentioned so far, there is a quick drop-off in usefulness. The Games Master Challenge prize Sword of Elements offers a unique icon distribution, but at a mere 8 icons it enters the metagame half a dozen years late. The Advent Calendar weapon releases were underwhelming, but then again Advent Calendar items have almost always been novelties.

We are still left with several high-rarity, yet-to-be-tested weapons these past few months, Amulet of the Unblinking Eye, Ice Cube Mace, and Frozen Scarf Whip. Perhaps one these items will turn out to be useful in League 97 play. Better yet, let's hope for another Hidden Tower or Smugglers Cove release soon. For two years in a row, the Hidden Tower has revealed a new weapon during January. (Those two weapons being the Sloth Armour and the Sloth Duck; is it time for a new Sloth weapon? We will find out next week.)

League 97's inaugural season came to a successful end, with two more tournaments taking place in the past four months. The league's popularity soared during the Garoo Unchained tournament in October, and many of the league's biggest names came out to compete in the Championship event in late November/early December. League 97 newcomer Xskimdlove won both of the events, becoming the first player to win two L97 tournaments.

If you have not yet read my summary of the 2013 season, I invite you to do so. The inaugural season was jam-packed with excitement, and the story of the season is far too long to cover here. Whether you were a participant yourself, are a prospective participant now, or are simply a spectator, you may find the recap quite interesting. In a year where the Battledome was devoid of much activity, League 97 was easily the marquee attraction.

The offseason is now upon us, but fear not, the 2014 season is approaching rapidly. The first L97 event of 2014, The Invasion from Meridell, is set to kick off in early February. The event will feature a classic tournament format consisting of a pool play followed by single-elimination playoffs. Signups have already begun; neomail Neoskulltula to sign up. 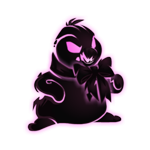 Two more events are already in the works as well for the league. A guild-oriented event is in the plans for the spring, and Summer Scorcher II will take place this August. That's not all, however; more events will be scattered across the other months of the year! If you are still on the fence about competing in League 97, now is a great time to get involved; iDB is devoted to bringing you plenty of L97 action all throughout the year. Better yet, encourage your guild mates to arm up as well, as the spring event will recognize both guilds and individuals.

If I Could Fix Just One Glitch...

Considering I just briefly wrote about League 97, it seems fitting that I plea my case for the repair of one particular glitch at this time. The new Battledome has a number of glitches, and the repair of one single glitch would in no way put an end to the Battledome community's many grievances against the new dome. Still, if I had to single out one glitch, one glitch that I would be most happy to see resolved, it would have to be the challenge glitch. 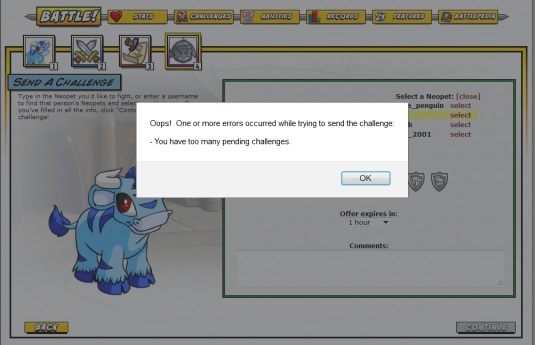 How the challenge glitch appears to the user, courtesy of Toon_link_dancing.

Obviously, this glitch presents a huge problem not only for League 97, but for all 2-Player battling. Some players afflicted by the glitch on their main accounts switch to battling on a side account while others become discouraged and discontinue 2-Player battling. Some unlucky players wind up with the glitch yet again on their side account(s), and most players can only be impacted by the glitch a certain number of times before they give up altogether. After all, with a limit of five total accounts, what is a player to do should they be glitched five times?

In the absolute worst case scenario, two competitors in an event can both be riddled with the glitch. In this scenario, what are the players to do? This scenario has prompted members of the Battledome community to suggest "paper battles" that skip the use of the actual Battledome completely and utilize a moderator/scorekeeper instead. Such paper battles would present a multitude of logistical problems, the simplest problem being the need for a moderator to be online at the same time as the two competitors.

Ultimately, the best resolution would be to eliminate the glitch and put players at ease. A number of glitches can harm the quality of a battle in the Battledome, but no other glitch actually prevents battlers from enjoying the Battledome from the get-go. As someone who would like to see the continued growth/re-growth of the 2-Player community, this glitch ought to take center stage. Resolving any Battledome glitch would be a step in the right direction, but enabling everyone to challenge each other without fear of being locked out would be the biggest step of all.

Updates to the New Battledome - 2014 Perhaps?

Although not the year that the new Battledome beta began, many players hoped that 2013 would be the year that the Battledome's beta phase ended. At the onset of the new year, players hoped the Battledome would be fully functional to coincide with the first true "war" in years. Unfortunately, the Battledome was still far from finished by the time the Obelisk War concluded, but not all players had given up hope. The everlasting Altador Cup was the primary focus every summer, but some players still dreamt of a fixed-up Battledome debuting in the summer. Again, these desires went unfulfilled, and the fall arrived and passed with no changes. Even in December, a few players, including myself, still had faint hope that work on the new Battledome would resume as an early Christmas present of sorts for the Battledome faithful.

Sadly, nothing ever happened as the year came to a close. The year ended without any update to the new Battledome. The same faerie ability glitches persist, and the same is true for the 2-Player challenge glitch, the opposing-move-viewing glitch, and countless other problems. 1-Player challenger HP increase is still a distant memory. Battle stances and species traits are still nonexistent, with unbalanced new faerie abilities serving as the only replacements.

However, all is not lost. We, the players, make our own Battledome experience. Long before the new Battledome ever came into being, the players created their own battling experiences. Depending on who is speaking, true 1-Player wars ended with either Hannah and the Ice Caves or Curse of Maraqua way back in 2004/2005. In the years since, it has been the player community that has kept interest in battling. Sure, the Neopets Team has thrown a game-changing new weapon into the mix every once in a while, but for the best of the last decade on Neopets, it has been groups like the Neopian Council of War, guilds, and dedicated individuals that put on tournaments that have kept interest in battling alive and well. Although the site-run plots and wars of the past eight years have allowed everyone to be a winner, player-run events have still kept the spirit of competition alive and well.

I will be the first to admit that competitive battling in the new Battledome is currently nowhere near the bar set by the original Battledome, but efforts are still being made to promote competitive battling. Neoskulltula ought to be recognized as almost single-handedly saving competitive battling in 2013 with the formation of League 97. Other "casually competitive" events are also being run in guilds to help maintain battling interest. Phoenix Warlords recently held a ladder tourney that featured teams trying to wipe out all of the opposing team's pet's hitpoints (healing was not allowed). Even without HP increase, Central Command is trying to make 1-Player battling fun again in the new Battledome by trying to rack up "poker hand" battle scores against challengers.

In such a barebones Battledome that only truly functions as prize farm, it takes a little bit of creativity to produce fun events. But then again, is this not what the player community has been doing for years?

At this time, the Battledome community is in survival mode. We need an improved Battledome for long-term continued interest in hobby battling, but for the time being, we must come together as a community and do the best we can to keep our spirits up. The community is already dangerously small, if it becomes much smaller who knows if even a major Battledome update could revive interest! If you are one of the players still waiting for the day of the update to arrive, why not attempt to sustain your interest now? Sometimes making the best of an unpleasant situation is all that we can do. After all, we really can only go up from here.